Background - Data are derived from the BIOPHARMA: Biopharmaceutical Products in the U.S.  and European Markets Web database, the only reference/information resource specializing in biopharmaceuticals, with the product listings below linked to free public (partial) records from the database.  See also the running list of recent years' approvals and 2010 approvals analysis. Earlier analyses include 1982-2008, a related article from Gen.  Eng.  News and 2008 approvals.

Summary - FDA approvals of new biopharmaceutical products increased significantly in 2009, reversing a trend of low numbers and a decline in approvals in recent years.  FDA granted 18 full appovals (BLAs, NDAs) for biopharmaceuticals products in 2009.  This was the highest number of new product approvals since 2005, and considerably more than the 11 and 10 approved in 2008 and 2007, respectively.  Eliminating 2 approvals for products that are not really new, 16 New Biopharmaceutical Entities (NBEs; new products) received approval in 2009, another recent record.  A record number of products were approved for orphan indications. No biopharmaceuticals received approval for cancer indications, contnuing a recent trend.
Compared to recent years: there was a further increase in the number of recombinant proteins (7); 2009 new products are expected to collectively attain significantly higher peak sales levels and have more impact on health care; and there were even fewer products from U.S.-based and smaller biotechnology-type companies.  Biopharmaceutical approvals are expected to further increase in coming years, with many applications pending or expected, including for new classes of products, e.g., gene therapies, stem and other cellular therapies, and cancer vaccines.

Basic Data/Graphs - Figure 1 shows the number of approvals of new biopharmaceutical products by year since 1982 (when the first recombinant protein was approved). 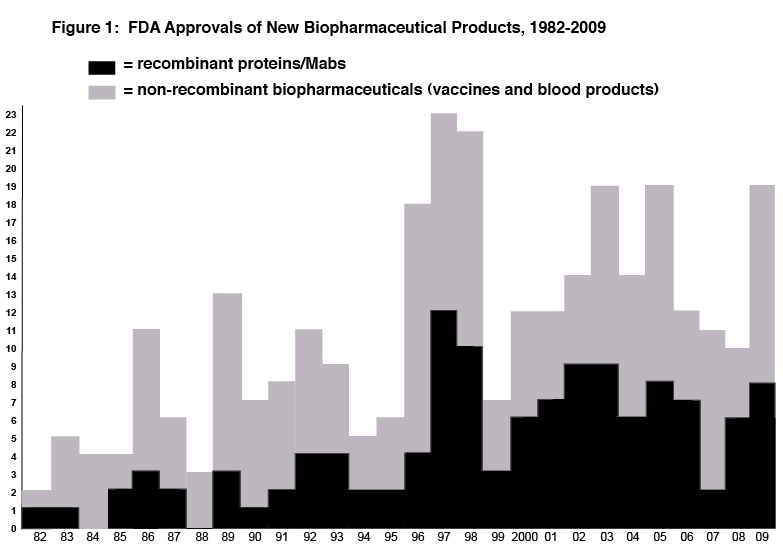 FDA approved significantly more biopharmaceuticals approvals in 2009 than in recent years.  There were 18 full approvals (BLAs, NDAs) for biopharmaceutical products in 2009.  Eight of the 18 full approvals were for recombinant proteins/antibodies, up from only 2 in 2007.  All approvals except one (Creon) involved products regulated by FDA as biologics, with these receiving BLAs.
The low numbers of approvals in recent years have been of particular concern, because a large number of products have been in the development pipeline and pending at FDA.  As many have noted, in recent years an increasing number of products have been experiencing delays in filing and FDA evaluation, rejections and/or their development has been abandoned after filing for approval.
The BIOPHARMA: Biopharmaceutical Products in the U.S.  and European Markets Web database reports at least 60 product applications currently pending with FDA or expected to be filed in 2010.  Although it is too early to state that problems and delays with FDA reviews of biopharmaceutical filings have subsided and whether these were attributable to the sponsors and/or FDA, the recent increase will hopefully continue.  With many filings pending and expected, further increases in approvals are likely in 2010 and coming years.

Among the 18 biopharmaceuticals receiving full approval in 2009, 16 are considered New Biopharmaceutical Entities (NBEs), i.e., are new, unique, distinct products.  This is a significant increase, up from 10, 11 and 11 in 2008, 2007 and 2006, respectively.
Products receiving full approval but not qualifying as NBEs, i.e., not really new, are: 1) Fluzone High-Dose, simply a higher dosage (concentration) of the current Fluzone influenza vaccine; 2) Extavia, simply Betaseron from Bayer Schering relabeled/rebranded as Extavia for sale by Novartis; and 3) Creon, simply the same pancreatic enzymes product that has been on the market for decades (generations) without ever receiving a formal approval (grandfathered), now finally receiving full approval.
Six approvals were granted in 2009 for influenza H1N1 strain vaccines, including 1 intranasal and 5 injectable vaccines, but these are not considered NBEs.  These received supplemental, not full, approvals, based on their being the same, including using the same manufacturing process, as other monovalent vaccines from the same manufacturer formulated into annual seasonal trivalent (3 strain) influenza vaccines.  Neither FDA, other regulatory bodies, nor the sponsors considered these to be new, unique, distinct products (just another monovalent vaccine for a strain that came along too late to be incorporated into the 2009/10 seasonal vaccine).
In 2009, unlike recent years, there were no approvals of biogeneric-like biopharmaceuticals, such as 505(b)(2) generic drug approvals.
[As is common in FDA approval analyses, biologics formally receiving full BLAs, such as Plasma and Red Blood Cells, but manufactured by local and regional blood centers are excluded.  Also, note that recombinant proteins/antibodies are regulated/approved as biologics, but most are now reviewed and approved by the CDER (drug) division of FDA].

Three recombinant monoclonal antibodies were approved in 2009, a significant increase from one each in 2006-2008.  The large number of chimeric, humanized, fully and de novo-designed human monoclonal antibodies that many companies and much of the industry are relying on for new products and continued survival are just starting to enter the market, with further increases likely in coming years.
No biopharmaceuticals received approval in 2009 for cancer indications, despite a large number of these in development.  This continues a trend with none also approved in either 2008 or 2007.  New biopharmaceuticals, including recombinant antibodies, for cancer treatment are widely hyped as expected to revolutionize patient care (with some hyping these, e.g., Herceptin, as already acheiving this).  So far, in terms of approvals, this has yet to materialize.
Products approved in 2009 expected to provide the most significant advances in patient care and have the most impact on the health care system include: 1) Wilate, a highly-purified, plasma-derived blood clotting factor, one of the few treatments for von Willebrand's disease, an orphan indication; 2) Kalbitor, a recombinant kellikrein inhibitor, the first product in this class to enter the market and one of the few options for treatment of hereditary angioedema (HAE), an orphan indication; 3) Stelara, a recombinant fully human interleukin-12 p40 subunit monoclonal antibody, the first product in this class, received approval for plaque psoriasis, an orphan indication; 4) Hiberex, the first monovalent pediatric Haemophilus influenzae booster vaccine; 5) Ilaris, a recombinant interleukin-1 monoclonal antibody, the first in this class to enter the market and the only specific treatment for treatment of Cryopyrin Associated Periodic Syndrome (CAPS), an orphan disease; 6) ATryn, transgenic goat-expressed recombinant antithrombin III (AT-III), the first recombinant AT-III product, offering an alternative to plasma-derived AT-III for treatment of antithrombin deficiency, an orphan indication; and 7) Fibrinogen, plasma-derived, the first specific treatment for congenital deficiency of functional fibrinogen (hypofibrinogenemia), providing an alternative to cruder cryoprecipitate for this orphan indication.  Nearly all of these products offering significant medical advances are used for treatment of orphan diseases.  While these are major advances for affected patients, these products are used by relatively few patients, and this respect, the medical (and also economic) impacts from 2009-approved biopharmaceuticals are inherently limited.
In terms of economic impact, peak sales for 2009-approved products are expected to cumulatively be greater than for products approved in 2008 and 2007, but with only a few products potentially achieving blockbuster status (sales over $1 billion/year).  Simponi from Johnsons & Johnson could acheive blockbuster status, if it is perceived as providing advantages compared to other TNF inhibitors or its approved indications expanded.  Another potential blockbuster is Cervarix, which already had nearly $250 million sales internationally in 2008, presumably much more in 2009 (not yet reported).  Cervarix will now compete in the U.S. against a similar vaccine, Gardasil from Merck, which had about $1.5 billion in sales in 2008, with the primary market for HPV vaccines being in the U.S.

2009 was a record year for approval of biopharmaceuticals with orphan indications (orphan drugs), with 10 approvals, up from 2 in 2008.  As cited above, several of these became the first therapeutics available for these diseases or otherwise are an advance for affected patients.
Removing orphan products from consideration, 2009 approvals would be at a low level comparable to the low number of approvals in 2008 and 2007.

2009 provided some notable technological advances.  Cervarix, recombinant human papillomavirus (HPV) L1 virus-like protein subunits expressed in baculovirus-transformed insect cells (cabbage looper; Trichopulsia ni) and containing a novel adjuvant, AS(04), composed of 3-deacylated monophosphoryl lipid A (MPL; derived from Salmonella minnesota), received approval.  This is the first human insect cell cultured product (other than diagostics and veterinary vaccines) approved in the U.S. Cervarix is the first U.S. vaccine containing an MPL derivative as adjuvant to receive approval.  Anti-vaccine advocates somehow missed making noise about this novel adjuvant, apparently distracted by developments with H1N1 influenza vaccines.  ATryn, recombinant antithrombin-III, from Genzyme Transgenics is expressed in the milk of transgenic goats. ATryn is the first transgenic animal protein to successfully receive approvals in the U.S. and European Union, a significant precedent for transgenic animal-derived therapeutic proteins.
Multiple blood plasma-derived proteins incorporated improvements in purification, including RiaSTAT being the first purified fibrinogen available in the U.S. and Prolastin-C providing a higher concentration of alpha-1 antitrypsin.
Otherwise, three fully human recombinant monoclonal antibodies received approval, with these now having lost much of their novelty.  Kalbitor, recombinant kallikreain inhibitor, from Dyax is relatively novel in terms of it being expressed by Pichia pastoris, rather than the usual Saccharomyces cerevisiae yeast, and the this ligand was discovered using Dyax's phage display technology.
Other products offered, at best, incremental advances in active agent design and product manufacture.

Companies and Countries as Sources

The companies with the most approvals were GlaxoSmithKine (GSK) and Novartis, each with three products approved in 2009.  Johnson & Johnson (J&J) and CSL Behring both received two approvals.
There was a significant increase in the number of approvals (11) in 2009 involving products manufactured in the U.S.  Other products are manufactured in Europe (Wilate, Agriflu, Berinert P, Gammaplex, Creon, Dysport/Reloxin, Ixiaro and RiaSTAT).
However, only five approvals originated from companies based (headquartered) in the U.S.  -- Kalbitor (Dyax), Prolastin-C (Talecris), Stelara (J&J), Simponi (J&J) and ATryn (Genzyme) -- compared to 7 in 2008 and 1 in 2007.  Only one product originated from a smaller, U.S.-based, biotechnology-type company, Kalbitor from Dyaxs.  Other smaller biotech-type company sources are Genmab based in Denmark, which performed early R&D with Arzerra, Intercell AG based in Austria, and Bio Products Lab. based in Germany with manufacturing in the U.K.  Otherwise, all of the developers and U.S. marketing companies are either too large to be considered a small, biotech-type company or are based in Europe.  Based on recent approvals, it may be time to start questioning the often-repeated and much-hyped claims that the U.S. and, particularly, U.S.-based biotechnology companies are the leaders in biopharmaceutical R&D.  m

What About the Future?

FDA biopharmaceutical approvals should further increase in coming years.  At least 30 applications are pending with FDA and at least another 30 are expected to be filed in 2010 (see the BIOPHARMA database).  Also In coming years, a number of biosimilars will enter the U.S. market, with many new companies worldwide entering the U.S. biopharmaceutical marekt.  Many of these products, despite containing much the same or similar active agents as prior products, will be substantially innovative and offer significant improvements, such as novel methods for administration.  Also in the next few years, there will be many filings involving new classes of marketed products, including gene therapies, cancer vaccines, stem and other cellular therapies, cultured tissue transplants and individualized biopharmaceuticals, with many of these products (e.g., gene therapies) in development for decades, along with newer technologies, such as RNAi.

*Minor corrections for one product were made on Jan. 21, 2010. Fluzone-HD (a high-dose influenza vaccine) had originally been reported as receiving a full BLA, but actually received supplemental approval. This product was removed from the list of BLAs, but was never considered a NBE (new product) and was not considered in the main analyses/commentary.